The halos around the galaxy at left are real–they are thin streams of stars and dust around the galaxy proper. “Thin” of course being relative to the galaxies’ size, so in this case some tens of thousands of light-years.

Now, the Arp images being taken in this program are Dual Purpose, since the 40-60 minutes of imaging needed to define an Arp galaxy when using NEKAAL’s 27″ reflector matches the typical time needed to detect a minor planet and to get a first measurement of its motion. Last month bagged 9 new minor planet designations for Farpoint.

From the article: “New observations by NASA’s Spitzer Space Telescope suggest that 55 Cancri e may be wetter and weirder than anyone imagined.” 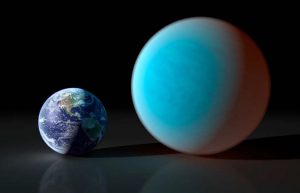 OK, it’s bigger than earth, cyan in color, and oozes. But does that make it weird? Um, there’s more, so apparently yes.

Read all about it here…