A few nights ago I was working the early morning hours doing NEO follow-up when I happened upon an interesting variable star. The star seem to brighten within a few minutes then it decayed brightness over a 1/2 hour or so to its previous level. I thought it a nice specimen of a flare star after producing a light curve through Maxim DL software for the 2 hour period. Thing is,  I can’t find it in flare star or even variable star catalogs. So It might be previously unknown. Either way I’m quite sure its a flare star (which generally are red dwarf stars with a very unpredictable rate).  I’m going to try and monitor it again but it’s possible it only flares a few times a year, or months, or days, or who knows? Without more observations we be able won’t find a frequency. Right now it’s only up high enough 2-3 hours before dawn. But as we get into early 2017 it will be up longer in the night sky. RA = 12 35 39.6 Dec 39 00 30.3.  It’s normal pre-flare magnitude is around 18.8 R. Flare peak is about 16.8 R
-Gary 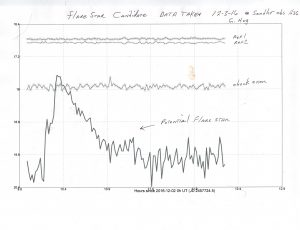