Here’s a picture of 178P taken with the .56 meter reflector at Sandlot Observatory. Its a stack of 16 – 1 minute images taken the early morning of 10-5-20. Each image was moved the distance and direction as the comet in its motion against the star background.

The comet has sprouted a wide tail about 25 arc-seconds long extending away from the coma. The tails angle is about 260 P. A. or just a bit south of due west. The comet is at 17.7 V magnitude but isn’t going to get much brighter over the next few weeks, topping out about 17.5 V. Its currently up 60 degrees by the beginning of dawn.

NEKAAL continues to be an active amateur observatory that contributes to the orbit analysis of new, and known, asteroids. Farpoint’s first asteroid data was reported on January 27, 1998. All reported asteroid orbit data can be found at https://newton.spacedys.com/neodys/index.php?pc=2.1.2&o=734&ab=0

We are using the 27in Tombaugh telescope and a NEKAAL member’s Meade LX200 16in SCT with their cooled CCD cameras and using Astrometrica software to obtain the RA and Dec coordinates.

Attached is a 2019-current summary of the data contribution.

The comet discovered by Graham Bell and I (C/1999 X1) at Farpoint in December 1999 and was subsequently number 178P by the Minor Planet Center has been recovered for the third time. Each orbit takes 7 years to go around the sun. This recovery image Is a stack of 20 – 30 second images taken at Sandlot Observatory the morning of 8-1-2020.

Comet C/2019 Y4 held promise to be a spectacular comet, possibly visible to the naked eye in May 2020. Unfortunately as a lot of comets passing close to the sun, Comet C/2019 Y4 is beginning to disintegrate. This image of the comet was taken the evening of April 9th, (April 10 U.T.) with the Little Blue 22″ at Sandlot Observatory.

You can see the small star-like piece that has broken away from the main nucleus. It is located just left and above the rest of the nuclear region. Once the flurry of activity subsides the comet will not likely become any brighter an average passing comet of roughly 9th to 10th magnitude.

22″ f4.1 reflector imaging at prime focus with a ST10XME CCD Camera. The image was comprised of a stack of 24 – 30 second images . Each image was offset in the direction of the comet’s motion via Astrometrica. The image above was cropped out of the original 22 x 14 arc-minute field of view.

C/2019 Y4 Image taken Apr 15 – changing fragmentation . There are now several components to the nucleus. One bright fragment in the left and a smaller fragment just below the bright one (barley discernible in the image) and a fainter condensation further toward the tail.

Looking for something else fun to do? Check out NASA’s online activities, e-books and podcasts. Spot the International Space Station in your sky and apply to be an astronaut.

There is a comet-looking object on the NEOCP that is likely the next interstellar to enter our solar system. The object is temporarily designated as gb00234. It was discovered by L51 Margo observatory a couple of nights ago. Here is a rather
poor image taken just as dawn was breaking on 09-11-19.
The image is a composite of 3 – 1 minute images taken with an ST10 XME camera mounted on the 0.57meter Little Blue Reflector. It will be interesting to see what media does with this.

Here’s M87 taken with my 22″ Reflector and an ST-8 CCD camera. The image show the jet of material traveling at some percentage of the speed of light while being squeezed out before reaching the event horizon . This does correlate with the black hole at M87 center that was recently ‘imaged’ and publicized. The ST-8 image taken at Sandlot Observatory was imaged on 04-02-19. 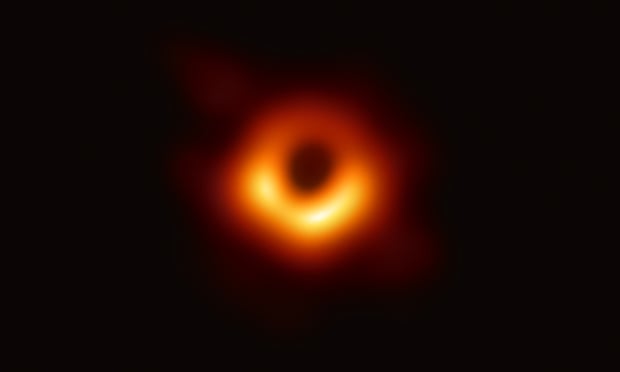 This image by the Event Horizon Telescope project shows the event horizon of the supermassive black hole at the heart of the M87 galaxy. Credit: EHT Collaboration

A long known asteroid suddenly sprouted a long narrow tail. This is a 22 minute (45 secs  x 30) cropped imaged taken with the Tombaugh Reflector at Farpoint 01-10-19 about 8:00 U.T.   The tail was visible faintly in each of the 45 second images.  This asteroid may have developed the tail through an impact with another rock.   [T08] ATLAS Mauna Loa images 1-5.5 U.T. showed  a comet like tail extending from the asteroid and  comments started flowing  on  mpml  and comet ml  list servers.    A couple of months ago it went through a 2 magnitude outburst and is still at that level as of last night. 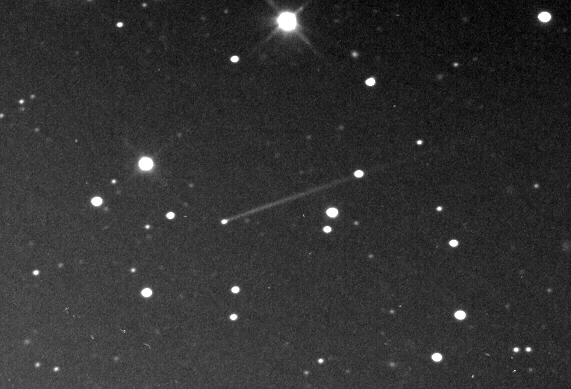 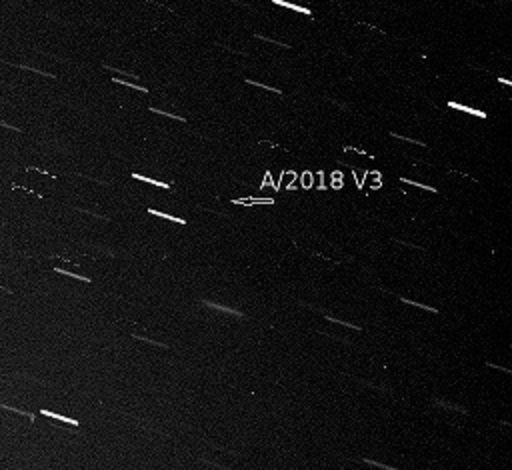 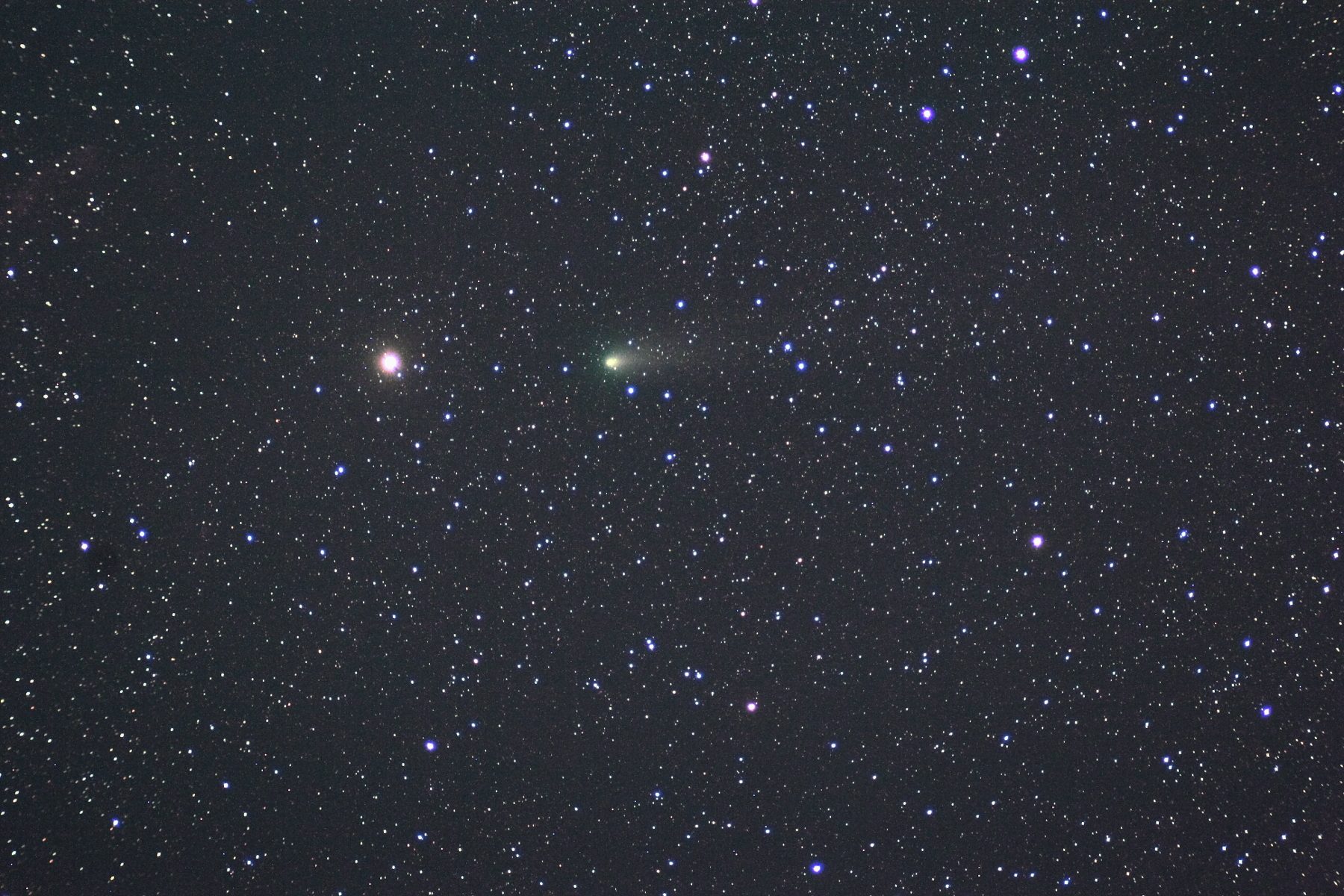 This 5 minute image of the returning comet 21P (Giacobini-Zinner) was taken Sept 16, 2018 using a Cannon EOS coupled to an Apogee 80mm F6.25 refractor.    The mount was a SST EQ-25 HPFD .   At the time of this image,  the comet was in the middle of the constellation Auriga.