Farpoint Observatory will be open around 7:30, September 27, for the total lunar eclipse. This eclipse is of the Harvest Moon, which is often thought to be larger and brighter than others, even though it’s just an illusion. But, it also just happens to occur at perigee, the moon’s closest point to the Earth in its orbit, so it actually will be slightly larger.

A lunar eclipse has several phases. The Penumbra is a faint shadow that isn’t visible without visual aid until near the next phase. The “dark” shadow starts across the face of the moon in the partial eclipse phase. The moon is completed in shadow during the total eclipse phase. As the moon moves out of the Earth’s shadow, the partial and penumbral phases follow, and the eclipse ends. For this eclipse, the phase times are listed below (All times CDT)

From the new (partial) Celestron 14″/Paramount MX+ rig, this is a single unguided, manually focused, un-flat-corrected, 60-second image of the Dumbbell Nebula, Messier 27, from my backyard observatory last Friday night, with hazy skies and substantial wind. 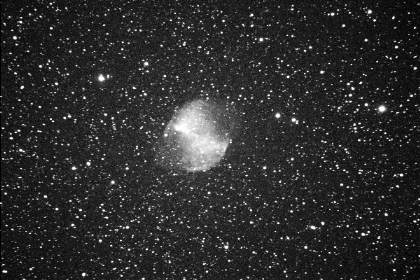 Not sure how much detail you can see in this 420×280 scale-down of the original 3072×2048 image. There’s perhaps a trace of coma, but that won’t be sure until the polar alignment and guiding are set. Already the whole-sky pointing RMS is down to 13 arcseconds. Pretty good for 3 hours after bolting all the pieces together, and it promises to be plenty good for variable-star photometry.